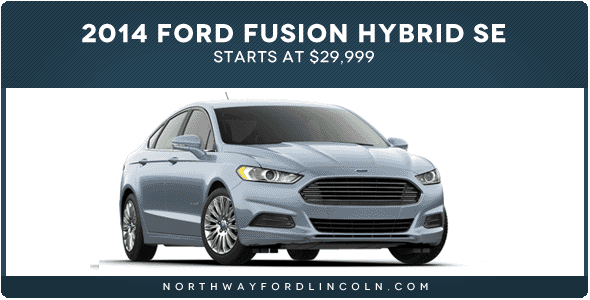 
For Sale @ Northway Ford (between Hamilton & Cambridge near Paris)

New for 2014 is a lower spec S trim that brings the price down a bit as well as new features across the range. Now available are inflatable rear seatbelts, ventilated front seats and a heated steering wheel.

The design of the 2014 Ford Fusion Hybrid echoes that of the standard Fusion. It's modern, shark-faced exterior is very attractive in a masculine kind of way and resonates well with buyers. The simple lines, complicated rear and sloping roof all give the impression of aerodynamics, which offers a fantastic profile.

The inside has been equally well thought-out. It continues Ford's continual improvement in workmanship, materials, noise cancellation and refinement. It's quiet, even at highway speeds. It's comfortable in all situations and it's a nice place to spend time, even in the back.

The driving position is upright and supportive. The dashboard and center stack look very simple and uncluttered, which is a good look in our opinion. Despite that, there is still plenty going on with the instrument panel, optional MyFord Touch and SYNC.

The powertrain for the 2014 Ford Fusion Hybrid is a combination of Ford's 2.0-liter gasoline engine and an electric motor with lithium-ion batteries. Total power output is 188 hp, which is sent to the front wheels via a continuously variable transmission.

The batteries for the electric motor do take up some space in the rear, reducing cargo carrying capacity slightly. Otherwise, compromise is minimal for this car. It drives as well as a standard Fusion, can carry four adults comfortably and is a refined ride whatever the road conditions.