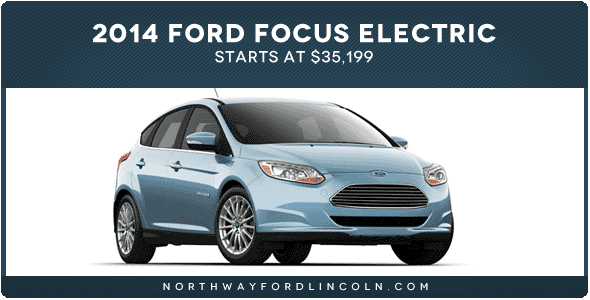 For Sale @ Northway Ford (between Hamilton & Cambridge near Paris)

The Ford Focus has been a mainstay for Ford's stable since its introduction. Despite stiff competition, it has remained a best-seller throughout. The reinvention of the model in 2012 saw a significant boost in comfort, performance and desirability, meaning the latest Ford Focus is one of our top picks for the segment.

The 2014 Ford Focus Electric is the one car we have driven that could change the way we view battery operated cars. It's Ford's first all-electric vehicle and the first one we thought we could comfortably live with on a daily basis.

The exterior design is the same as the standard Focus. It's unashamedly modern, good looking, poised, well thought out and European in its aspect. It's a premium shape, hinting at much more than just a mid-market hatchback and we like it.

Inside is much the same. There are lots of soft touch materials, lots of cool trim, the seats are comfortable, there's lots of light, good visibility all round and comfortable seats. The instrumentation is completely configurable and the center stack offers battery information as well as MyFord Touch and various controls.

Where the 2014 Ford Focus Electric really stands out is under the hood. Instead of the standard Ford 2.0-liter gasoline engine, we have an electric motor that generates the equivalent of 123 hp and 181 lb-ft of torque. It uses a 23kWh lithium-ion battery pack with active cooling to provide consistent power delivery whatever the conditions.

Power is sent to the front wheels via a single speed direct-drive transmission.

The range varies depending on driving style and conditions, but averages out at around 76 miles. If you have access to a 240v outlet, it will fully charge in four hours. That stretches to 18 hours for 120v. The EPA rating for the 2014 Ford Focus Electric is 110 MPGe city and 105 MPGe combined.

Ford and Microsoft designed a system to selectively charge the car using only off-peak power to lower the running costs even further.

As far as we're concerned, the 2014 Ford Focus Electric is the best of the bunch right now. It's refined, easy to drive, simple to manage and offers best in class range. Despite the hefty price tag, driven right it will pay for itself quickly.